Moora Kelpies was founded in 1988, however Barry has been breeding and training dogs since he was 17 – first Border Collies and then Kelpies. Whilst at a sale in 1988, Barry saw some Kelpies belonging to Neil and Helen McDonald and thought they were of a calibre he hadn't seen before. As they say, the rest is history. Barry & Margaret purchased two bitches, a red and a black & tan. These dogs, 'Neil' and 'Helen' were the foundation to breeding for Moora Kelpies.  A few years later Barry & Margaret purchased 'Bronty', again from Neil & Helen McDonald of Sherwood Kelpies.  'Bronty' was a big no-nonsense allround worker sired by Watta 'Kelp'.

Barry went to a few dog schools run by Neil McDonald, and Neil held dog schools at Moora.  With the knowledge from these schools, and from observing other dogs working, Barry was getting an eye for where he wanted his dog breeding to go - a good allrounder type of dog, that could work yards, paddock, and truck, and still be able to be used for competition.  Barry was competing with 'Helen', 'Neil' and 'Bronty' for yard dog trails and was having some success.

Since those early days, Moor Kelpies have purchased breeding stock from Wyreema, Avenpart, Wabba, Sherwood, Beicka, Capree, Nacooma and other studs.  Some very good dogs have been bred - and true to the original purpose, Moora dogs are excellent allrounders with eye, bark and mob respect.  Able to work cattle, sheep, pigs, and poultry - they are forceful in the yard and have a strong presence in the paddock.

Having a loyal, hardworking Moora dog on their side will make every farmers' life easier. 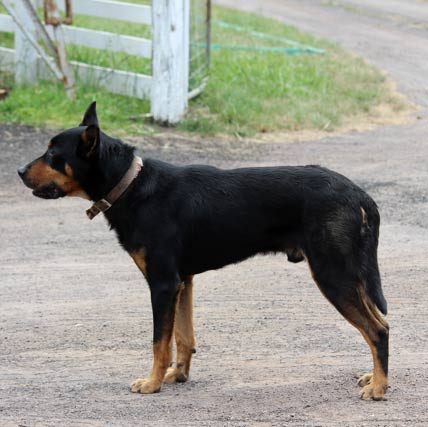